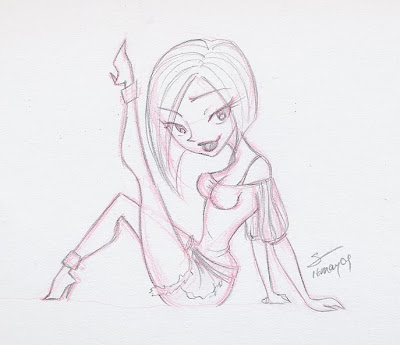 This weekend, to avoid the stress and hassle of finding parking (and actually parking) in San Francisco, I took a long relaxing ride on the train to meet some friends there. I was recently inspired by Shane Glines' cartoon pin-up girls, and sketched a few big-headed, long-legged girls on the way up. The train ride was very bumpy, but luckily there were many stops along the way. During the bumpy part of the ride, I would draw the rough underlying sketch with my red pencil, and then quickly overlay a few strokes of pencil lineart at the stations.
In addition to being a foxy lady, the girl in the sketch above must also have some serious muscles, because that pose looks pretty difficult to hold. It was really fun to draw curvy legs on these ladies, which is probably why I drew them a little longer and more slender than usual. One of the main reasons I like drawing girls over guys is because they have a lot more accentuated curves. This makes the poses much more dramatic and gives their shape much more depth. 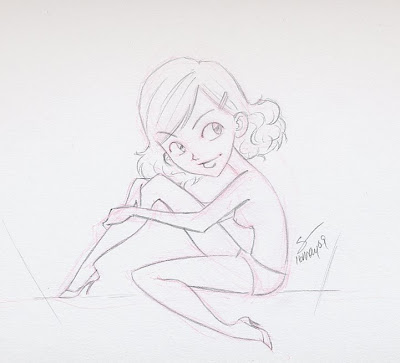 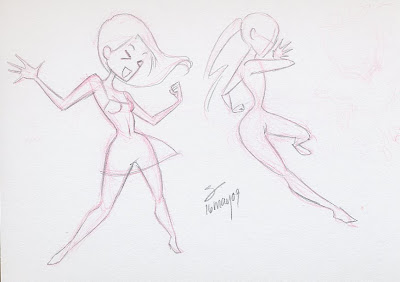 So why are drawings that are grossly disproportionate compared to a normal human body still acceptable as cartoons? I was thinking about this and realized how many cartoon characters have giant heads, big eyes, or long slender appendages, and I began to wonder what kinds of proportions work, and which ones don't.
I was reminded of the sensory homunculus, which is used in psychology and neurology to depict which body parts require the most neurons to sense. In cartoons, however, it seems to me that the body parts are exaggerated based on how they are perceived. For example, since people pay a lot of attention to the details of another person's eyes, it does not seem unusual for cartoons to have larger-than-normal eyes. I think that the length of the arms is compared mostly to the length of the legs, and not to the size of the head or body, which is why Dee-Dee's and Jack Skellington's arms and legs are long and slender, independent of the size of their heads or bodies.
Anyhow, these observations are simply based on my own drawing experiences and not anything more scientific. If you have any more interesting insight or details, please share!
Posted by spyra at 10:38 PM