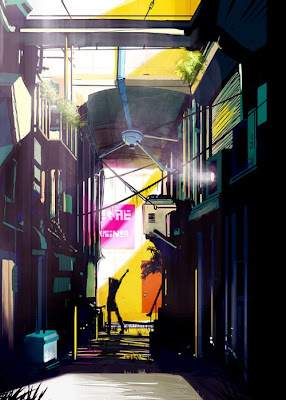 In order to draw effective environments, an artist must have a solid understanding of the concept of space. When I view these beautiful urban illustrations created by Matt Laskowski, I feel like I am being pulled into a whole different space. The vibrant colors and dynamic perspectives tell a compelling story in each scene and give them personality. 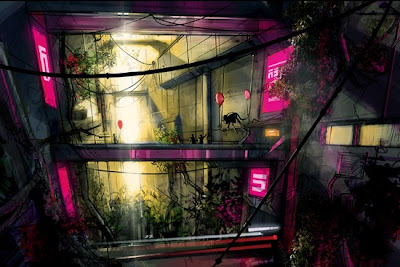 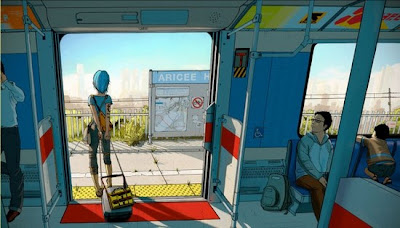 When I first saw his drawings, I was blown away because background details and cityscapes are not something I have a lot of experience with. Matt does such a wonderful job distinguishing the lights from the shadows, and accenting details with bold colors and carefully placed characters. 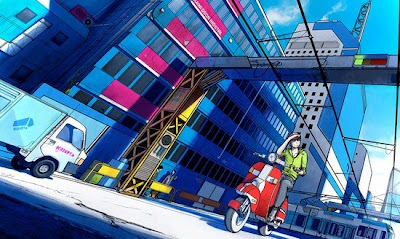 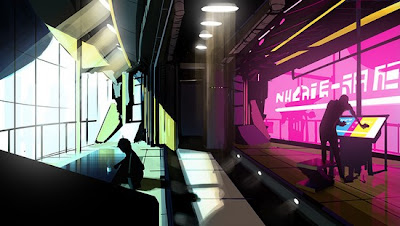 Don't you think it's awesome that his last name also contains our favorite drawing program? I certainly think so. :)

Be sure to check out the rest of his amazing portfolio at Plastic Shards, where he also posts some really neat tutorials, and his DeviantArt gallery.
Posted by spyra at 10:49 AM 3 comments:

This weekend I was away from the house and absolutely could not find a suitable container for holding water. It was looking dire (for watercolors, not anything else, thankfully) but then at the last moment a tiny old cooking pot was unearthed. The show WOULD GO ON!

Anyway—this week's painting is a tad more ambitious than the last couple of paintings, if only because it actually takes up an entire sheet of paper and I probably spent more time on the background than anything else.

As usual, I roughed out the drawing on the computer, traced it off and refined it on paper. I wasn't feeling too confident over what the color scheme and lighting would be, so I roughed that out in Photoshop as well. 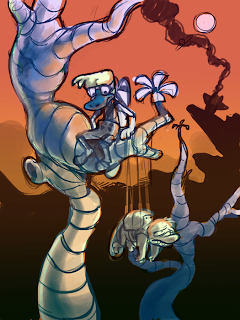 Space, and depressed-looking animals. I swear to god this isn't an obsession.
And, as usual, I started painting with the tones and shading. After some time had passed it occurred to me that once again I had forgotten to do something vital: tape down the paper so it wouldn't warp.

Any tape will do as long as it isn't terribly sticky—you don't want the adhesive to damage the paper, for obvious reasons. The masking tape can also be useful for blocking out large areas of color that you don't want to run into the details of your picture. 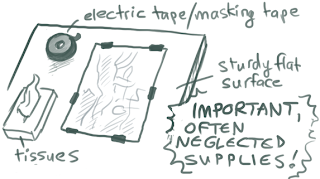 The tissues, dear reader, are for tears. Or, ah, dabbing away unwanted paint. Whatever floats your boat!
The final product ended up coming out quite a bit different than I anticipated. I opted out of making the lower half of the background quite so dark, mostly because I liked the interplay of the reds and greens and didn't want to mute them. 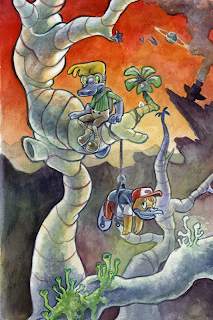 Now with added lichen!
Of course, there are still a few things here and there that could stand to be touched up. Sometimes it's good to distance yourself from your work for a day, so that when you go back to it you have a clearer vision of what you need to do with it.
Posted by Caitlin Lehman at 2:49 PM No comments: