A Celebration of Things Made 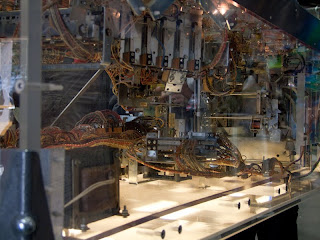 The inner workings of a pinball machine--wow!

I attended Maker Faire last weekend. It's a weekend getaway put together by the creators of MAKE Magazine, which focuses on the do-it-yourself community. Both the magazine and the fair bring together a community of artists, engineers, and designers who love working with their hands, and who wish to spread the value of hand-made goods to others. 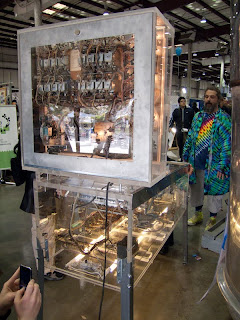 They replaced the typical casing of a pinball machine with clear acrylic plastic.
The fair is a gigantic arts and crafts festival, involving anything made. Since "being made" is a pretty broad criterion, you can expect to see anything from robot duels to fire displays to knitting corners. Much of the fair is dedicated to technology, art, and exploration.

What's so cool about making things? You can learn a whole lot by deconstructing and then reconstructing an object. Using your hands to figure things out is a key skill in life that is, unfortunately, no longer as emphasized in the classroom anymore. Attenders of Maker Faire value the hands-on experience, our innate curiosity, and the importance of fostering burgeoning creativity. 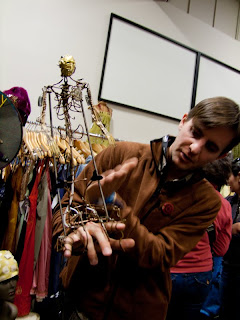 This guy pictured above made the most amazing puppet. It's a humanoid skeleton worn on the hand, whose arms, legs, and head can be mechanically controlled by the guy simply moving his fingers. Each body part could be manipulated independently when the fingers pulled on various combinations of wires and string. The skeleton could even hold up its arm, move its fingers, and grab a piece of paper! 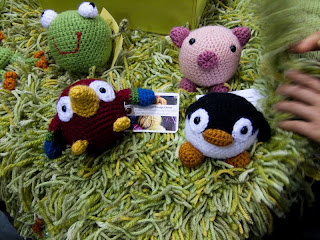 People not only sold knit, crochet, and sewn goods, but also brought materials to teach anyone interested in learning. 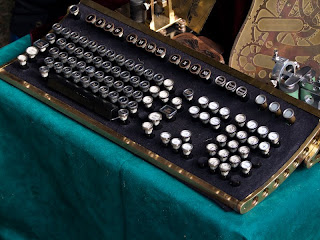 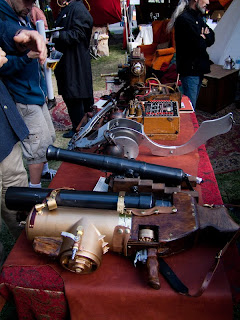 Steampunk enthusiasts display highly ornate creations that replicate the retro-futuristic style, including two fully-functioning mini cannons.
One thing that I love about Maker Faire is walking around and seeing the unique uses of various materials. Inspirational makers make you think about where materials come from, how things are assembled, and why hand-made goods have a much more positive impact on the community. One common theme that makers address is the huge amount of waste generated by society today. Most attendees are much more supportive of locally-made and quality goods that have a lower environmental impact than cheap, mass-produced items. 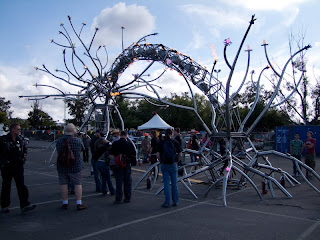 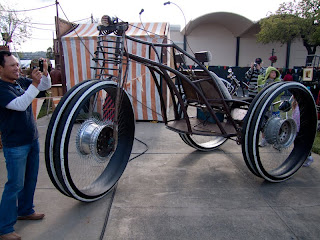 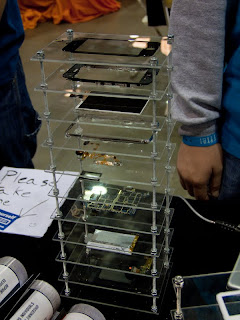 Broken iPhone? Don't just throw it away! ifixit.com will show you how to fix your belongings.
The most memorable display goes to ArcAttack, a band that performs music using Tesla coils. The coils are connected to a computer or DJ pad that controlled its frequencies, and created lightening arcs of different intensities and pitches. The high beat trance-like music was exciting... 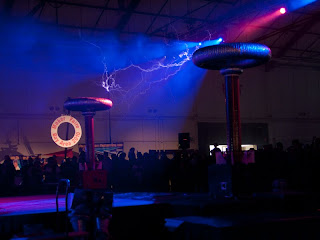 Lightening is so much more intense in person because you can actually see the 3-D space they occupy. 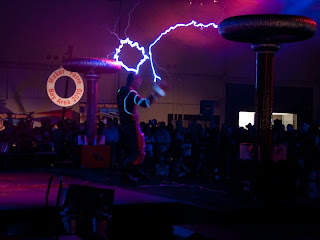 The man isn't hurt by the electricity because he is wearing a Faraday suit.

...until a guy in a Faraday suit jumped in!! Then it got way crazy. This guy was dancing between arcs of lightening. He wore a full-body suit made of chain-mail (ie, a Faraday cage), which deflects the electricity around his body. When we talked to him after the performance, we learned that although he doesn't feel anything from the lightening itself, he feels pressure from the heat that's generated. The sparks were quite loud from about 30 feet away; I can only imagine what it must be like when the lightening hits him in the face!


I attended Maker Faire to man the Ambidextrous Magazine booth. Ambidextrous is a high-quality publication centered around design produced by students and alumni affiliated with the d.school at Stanford. The magazine just launched its most recent issue, "Cheap," which tackles issues such as the value of the dollar store and repurposing recycled materials. If you are interested in the broad vision of "design," what it means, and connecting with those in the community, Ambidextrous is a fantastic magazine to check out. 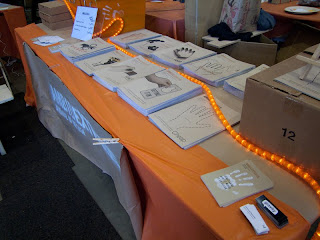 A display of issues, past and present. 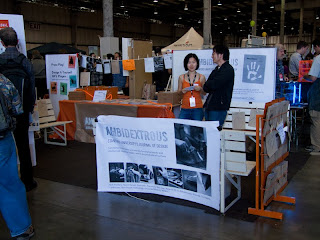 Booth babes are imperative for sales.
Posted by spyra at 11:47 PM No comments: