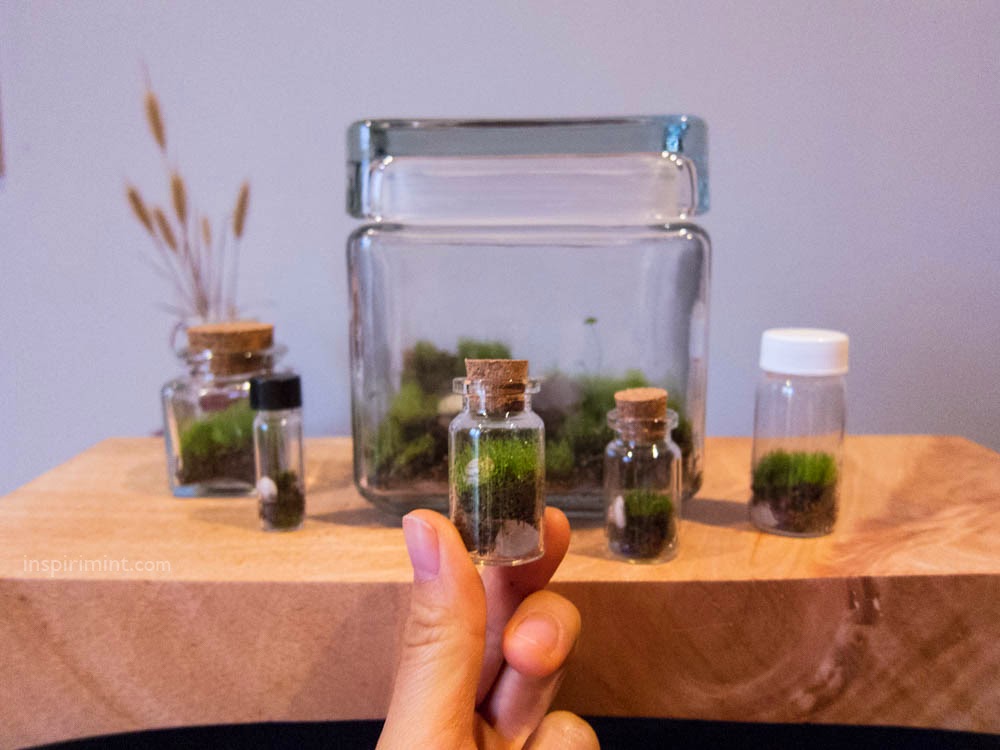 Is it rainy where you are? It seems, in the past few weeks, as though the Bay Area has seen more rain than it had the past few years. We even had a thunderstorms that clocked over 70 mph winds! One benefit of the incessant moisture? Mosses, mosses, everywhere! 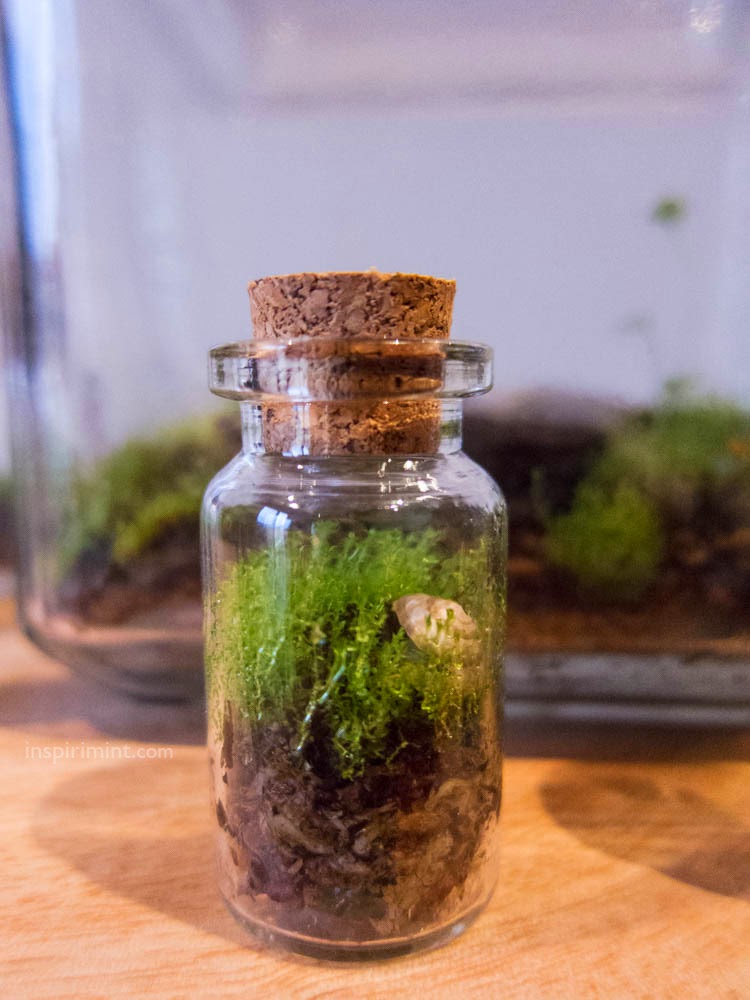 After the first few rains, I had the idea to make some moss terrariums. I've always loved the idea of a self-contained biosphere, and a closed-top terrarium comes pretty close. Our house had some small empty jars, so the thought of making some tiny micro terrariums was pretty appealing. After all, mosses are tiny plants that do well in tiny spaces. :)

If you keep your eyes open during the rainy season, you can see moss pop up pretty much everywhere. In urban cities, they can be found on sidewalk cracks, at the base of buildings, and around wet flower pots. In the country, they are found around rocks, on trees, and at the base of fences. Basically, you can find moss growing in most places that collect water or retain moisture. A few weeks ago, during some rain storms, I came across a healthy mini-carpet growing in the cracks between the bricks of a driveway. 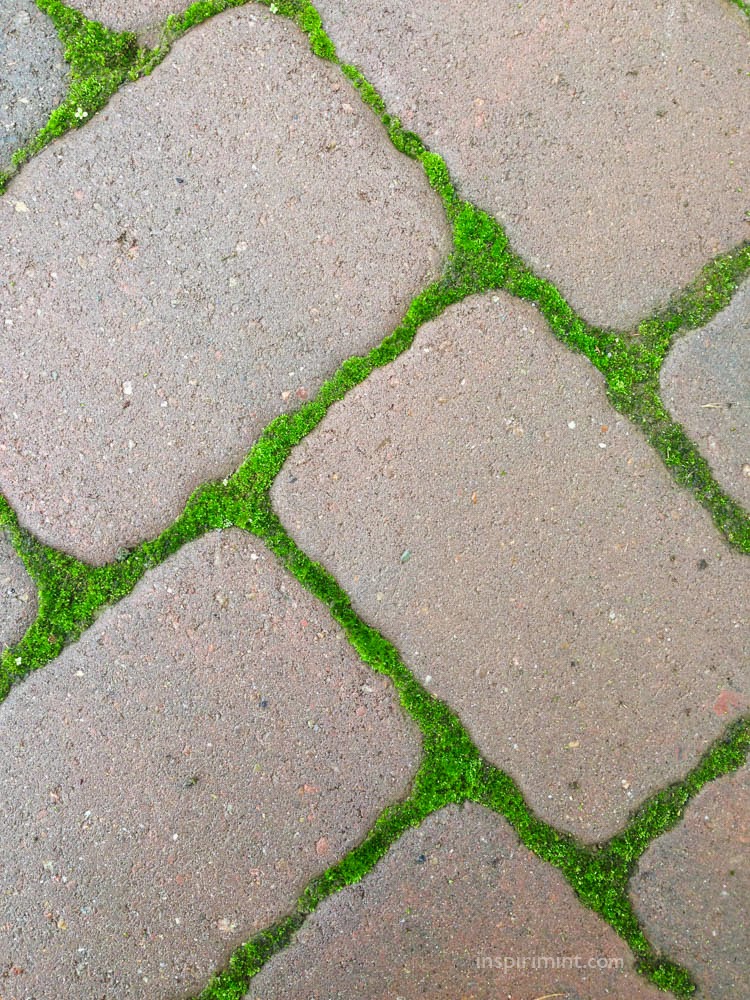 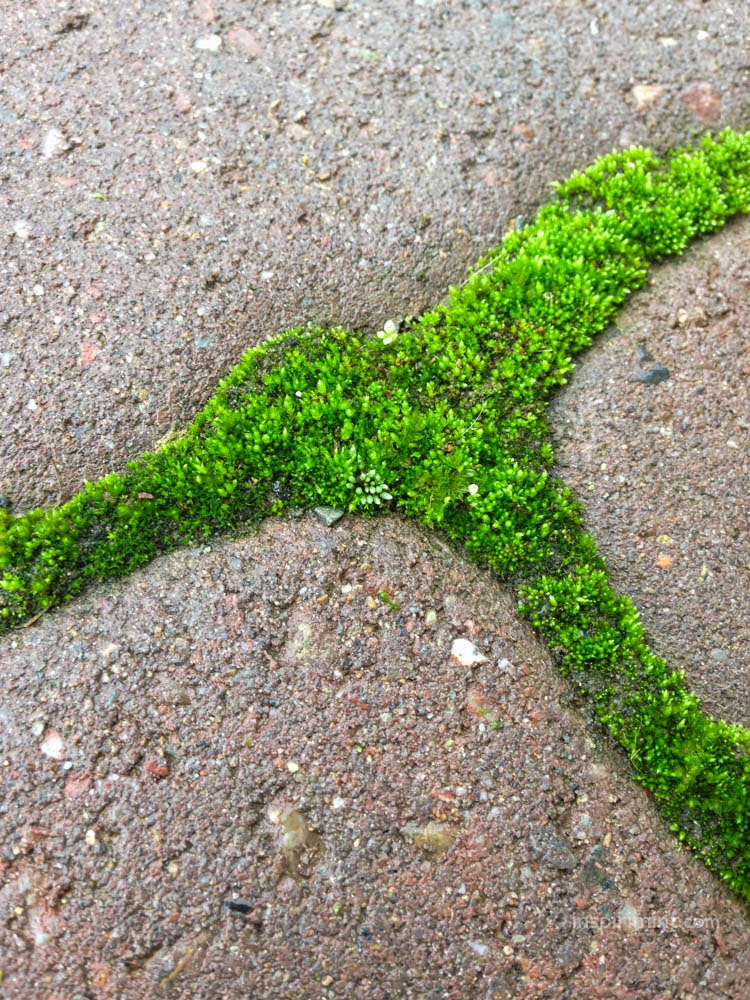 It was pretty easy to pull them off the ground using my fingers, with the rains having softened the soils, and into a small tupperware container. I tried to retain as much of their original soil as possible to use that instead of adding soil to my jars. Since there was enough moisture in the soil from the recent rain, the moss did fine sitting in a covered tupper for a few days. 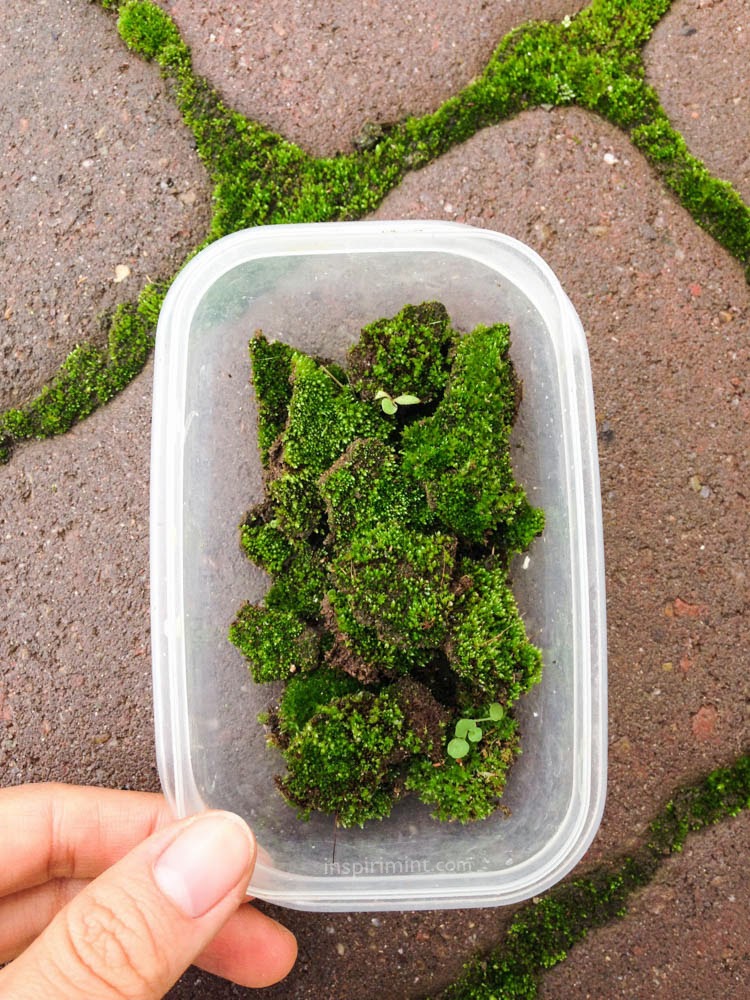 A simple google search led me to a bunch of websites showing me what I needed to make a closed-top moss terrarium: just layer some pebbles, filter, soil, and greenery. I have always loved collecting rocks and sea glass, and have a bunch saved over the years that I've never done anything with. They were perfect for lining the bottoms of my jars, and I used soaked dried peat moss as the filter lining. 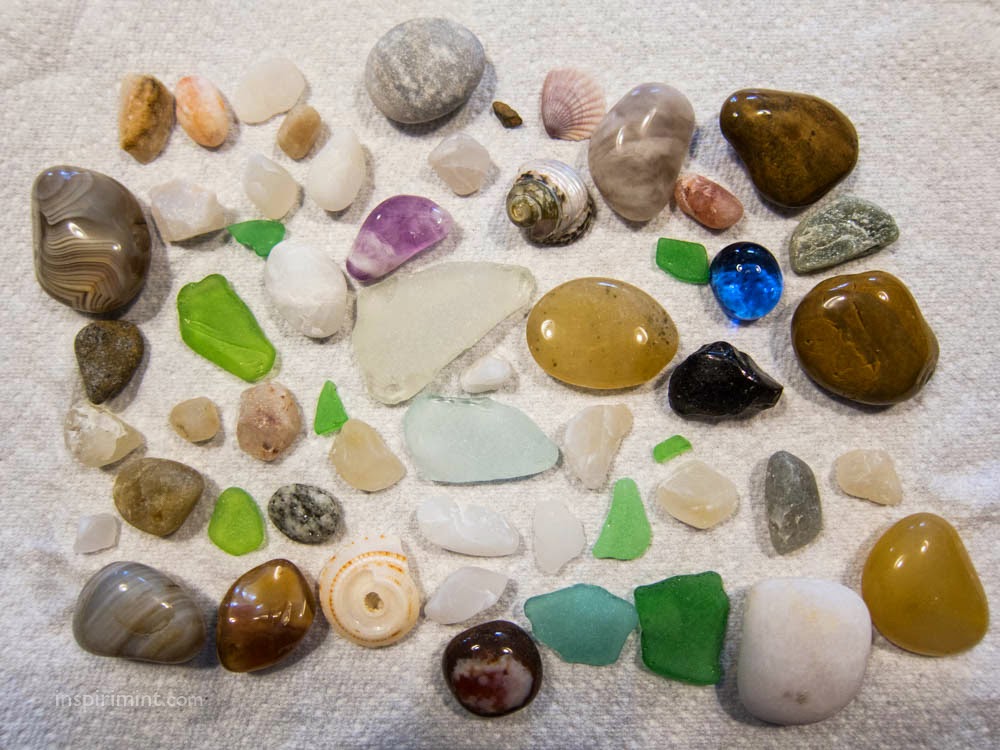 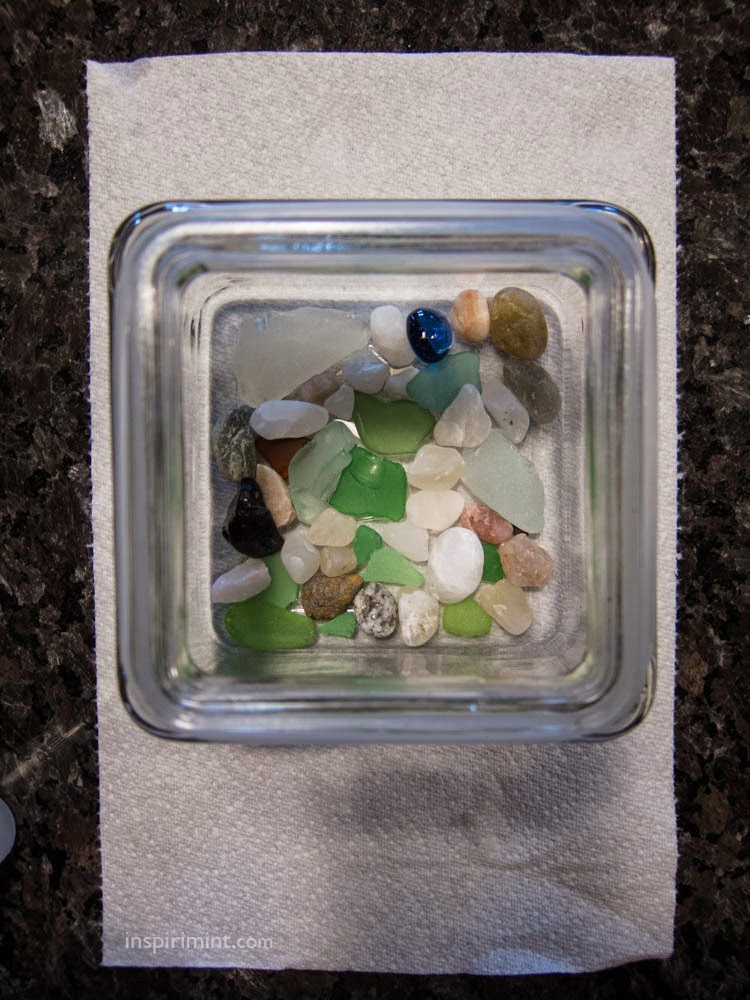 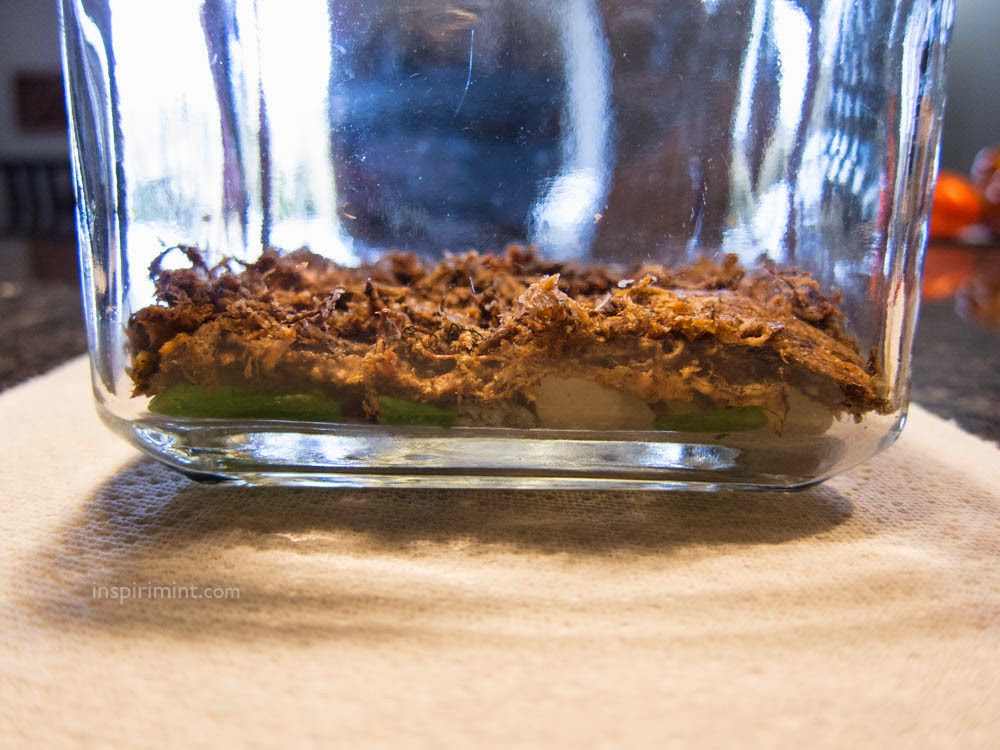 After putting in the base layers, I added the chunks of moss and a few decorative pieces of bark, stones, and shells. I even put in a tiny snail when I found it wandering inside my house. Moreover, some pieces of moss I had collected had grasses growing alongside them, so my terrariums have the added benefit of a bit of botanical diversity. 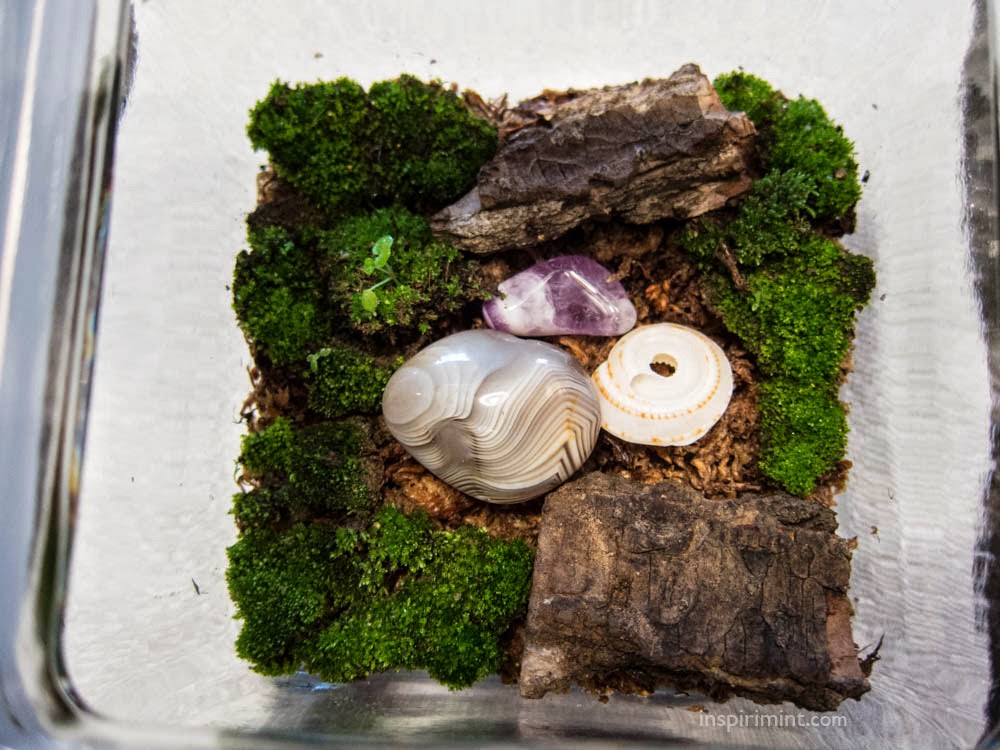 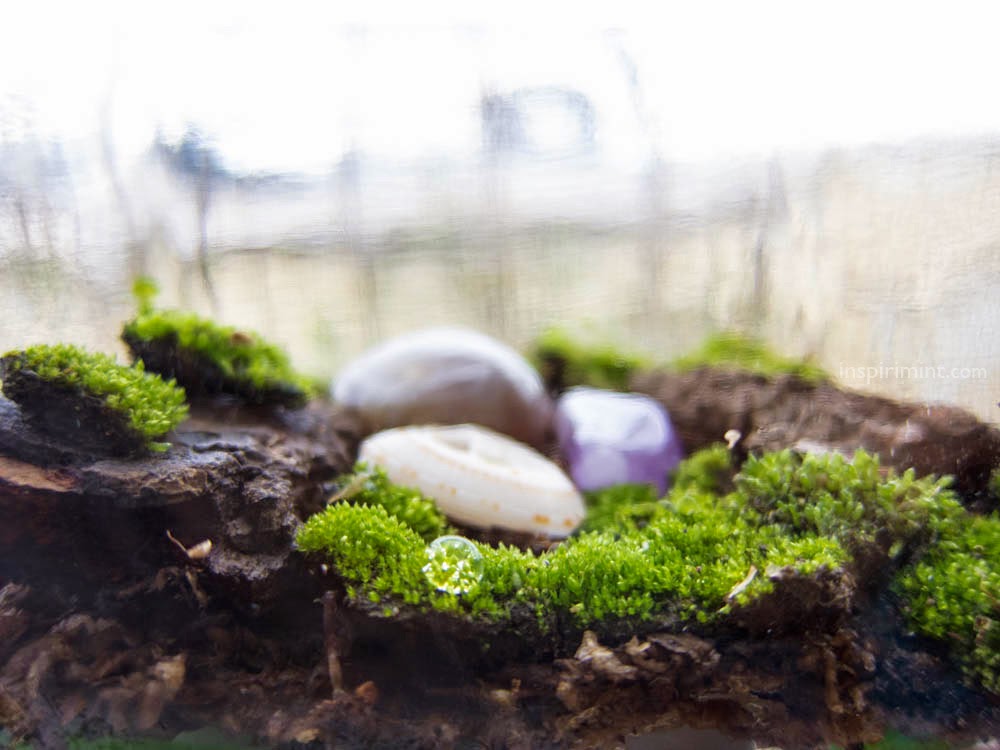 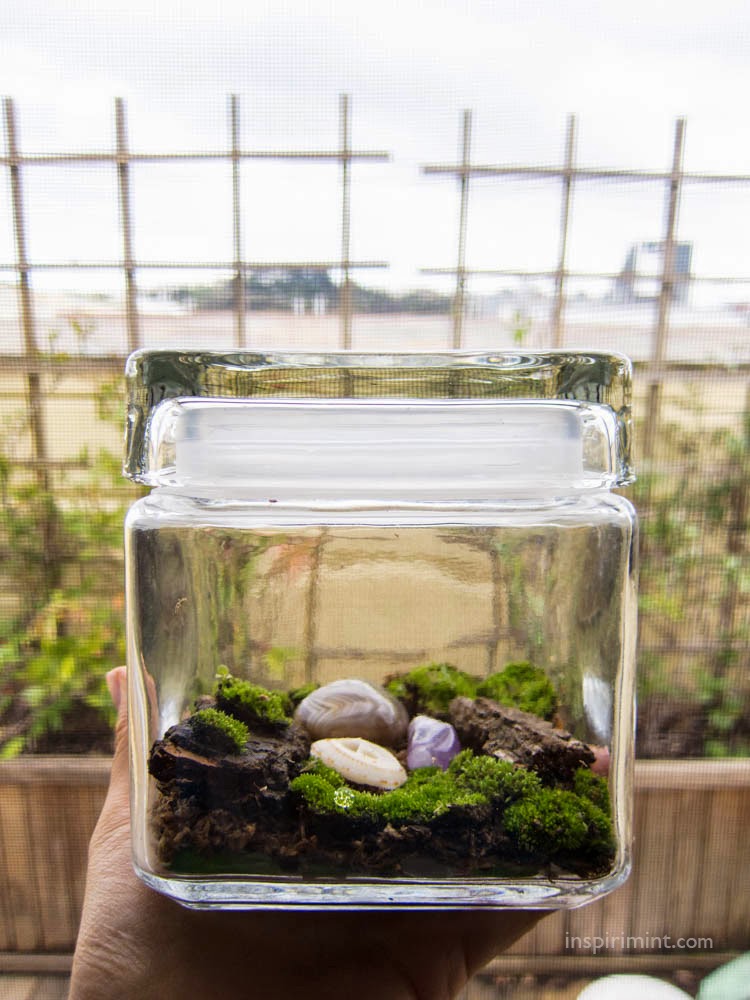 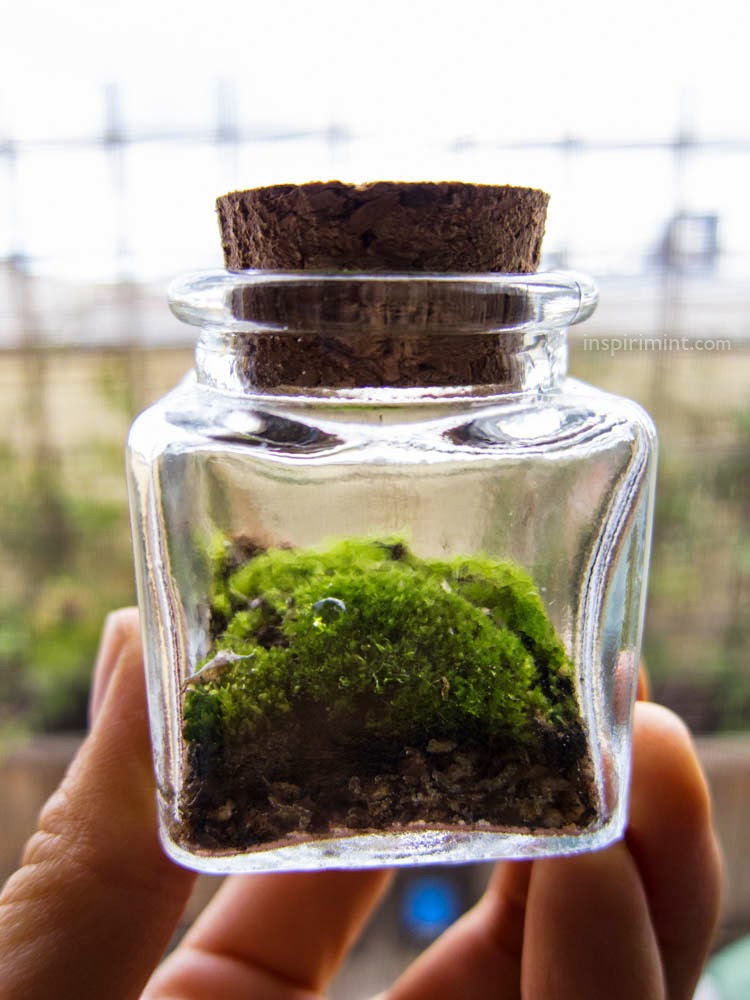 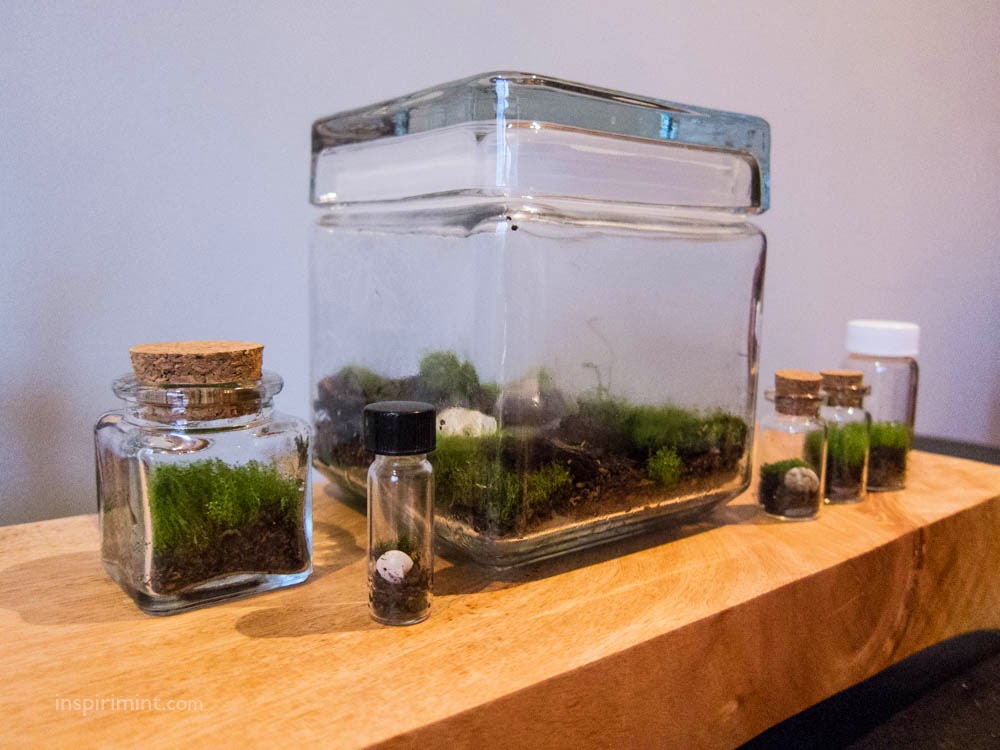 Closed-top terrariums work because the moisture the moss requires does not escape. I suspect the plants themselves do not need very much air, but an occasional exchange every week while you moderate the water supply should suffice. A few weeks ago, when I made my first set of moss terrariums, I made the mistake of adding soil that had previously been used in a mushroom-growing facility. After a week or so, mycelia had started to show themselves, and I had to abandon the operation and clean out the jars.

This time around, I ended up not using any additional soil on top of the peat moss layer, and simply adding the moss with their soil directly on top. Also, instead of using a spritzer, as many sites suggest, I ended up using an eye dropper to moisten the soil. The spritzer is great at imitating a moist environment, but I think the water dropper is a bit better at imitating rain.

It has been over two weeks since I made these, and no mold so far! Making and growing these has been very zen. I hope my tiny green gardens can last at least as long as the wet season does. :)

A month ago, the hubbs and I finally landed a temporary situation in San Francisco, our new base city. Back when we made the big trek out east to the glamorous NYC, I thought: Manhattan, what an inspirational place! I gotta use this opportunity to write interesting blog posts and make some fun art!

Did it happen like I thought? Nope. The culprits? I blamed grad school, social life, and work. But actually, I was just plain too busy enjoying New York to make the time to create. Looking back, yes, I do wish I wrote more often, but you know what? It's okay. I was living in the present and I enjoyed it. I'm moving on to the next leg of my journey.

Now that I'm in a new inspirational town (SF is kinda like a "town" compared to its big east coast brother, non?), I keep thinking the same thing, that I'll write, make, and draw more. Especially because I'm in the land of software developers, designers, and entrepreneurs, and I feel pressure to craft my "web presence."

What's inspiring me now? My current project is exploring the health technology scene in SF, and I have been meeting some really interesting people and hearing about their life-changing projects. The ingenuity and energy of entrepreneurs in the Silicon Valley never ceases to amaze me! I have also been learning how to use twitter and I'm finally starting to use it consistently (@spyra). I've also been posting fun things on Instagram (@spyra), which is also my go-to for discovering new artists and photographers. I suppose I'll add more social networks over time, but I can only handle so much right now. :)

In closing, here is a sketch I did in December: 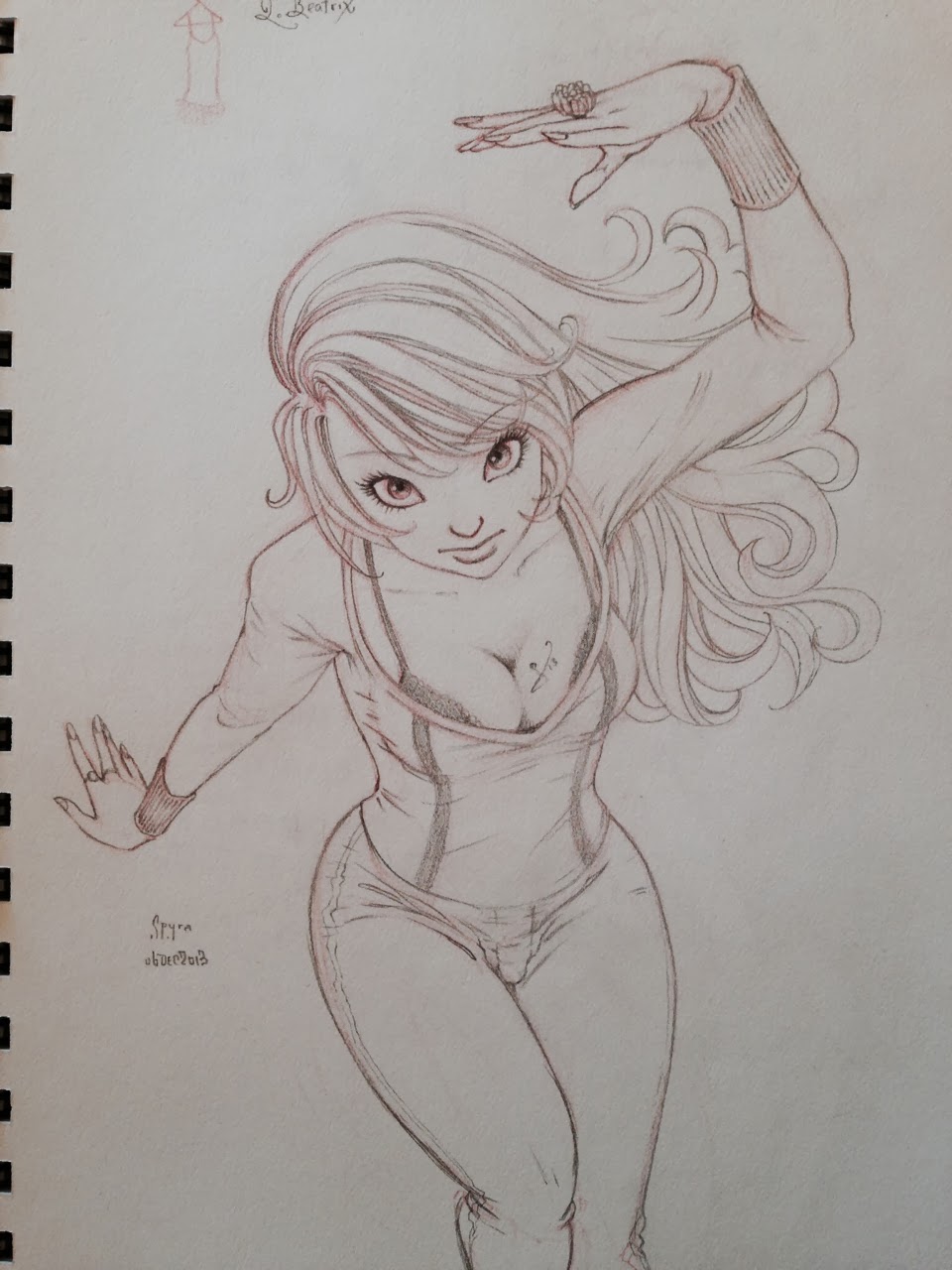 So... any suggestions for things to do in my new city? Let me know in the comments!
Posted by spyra at 1:48 PM 2 comments: