I am sorely out of practice at drawing human anatomy. Clever readers may have inferred this from the complete lack of human beings gracing Watercolor Wednesday thus far!

Never fear: it's time for a sketchbook adventure! 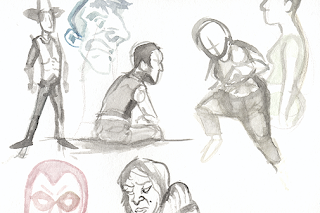 I pulled out a small moleskine sketchbook and made some attempts to bust out of my doodling funk. When in doubt of where to start, I draw cowboys. I don't know why, but it's a good way to break the ice. Sometimes I start off with the occasional hag. And, in this case, the top half of The Phantom's face. 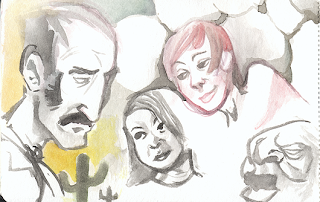 The results of sketching with watercolors this time around: a bunch of disembodied heads, one of which is filing for separation from her neck. 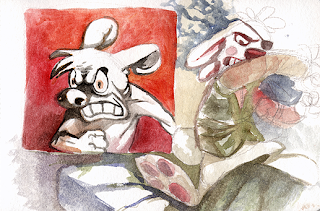 Eventually the allure of drawing people in period costume and heads floating in empty space wore off and I went back to drawing angry cartoon animals. The fellow on the right is supposed to be leaping over a train seat but instead it looks like he's angrily dancing or stretching, neither of which sound like safe activities for someone wearing an eye patch! Be careful, crazed anthropomorphic rabbit.
Posted by Caitlin Lehman at 5:46 PM