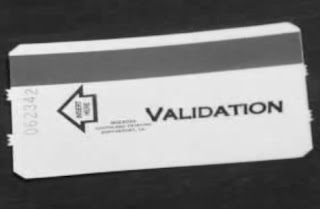 Today, I was totally inspired by the short film Validation. Nowadays, it's not unusual to see some pretty good videos on the net, but this one really caught my attention because of the positive message the film gave and how well it was executed. The story begins by introducing us to the parking validater (you know, the guy who stamps your ticket), who in addition to giving people free parking, helps them feel validated by giving compliments and putting a smile on their face.

"Validation"
This 16-minute short is written and directed by Kurt Kuenne, and has won a handful of awards. The touching story flows and unfolds with much finesse and TJ Thyne is a wonderful actor whose character is incredibly sincere and genuinely compassionate. I encourage everyone who likes putting a smile on someone's face to watch it.

"Validation" was especially inspiring for me because the protagonist did things that helped others in so many unimaginable ways at practically no cost to himself. Unfortunately, as simple as this sounds, it doesn't always happen in real life. If everyone could do just one unconditionally good deed each day, the world would be so different.

This film inspires me to be kinder to people; it shows that a small positive gesture may result in an enormous positive impact, and this world is always in need of more positivity. You know that awkward silence between two strangers when they share the same space? I'm usually quite shy around people I don't know, but I will make more of an effort to acknowledge their presence, strike up conversation, and most importantly—smile. After all, meeting new friends is much more fun than awkward silence. How will you leave a positive impact?

Email ThisBlogThis!Share to TwitterShare to FacebookShare to Pinterest
Labels: 4D