You can call me Queen Bee

Two weeks ago, we discovered a cluster of bees in our vineyard, clumped on a branch:


It was my first time seeing a cluster of honeybees this close, and it has been quite a fascinating learning experience. I didn't know how aggressive they would be, but I did know I wanted to get in as close as I could—curiosity and Instagram beckoned!


I was able took a bunch of photos and videos from less than 1 foot away without disturbing them at all. The cluster is just a buzzing ball of crawling fuzzy bodies and vibrating wings. You can hear the soft hum and even feel the wind from the vibrations if you get close enough. They are shivering around the queen to maintain a core temperature of 95°F, even though can get to 70°F during the day and 40s at night.

Over the first day or two, we debated whether or not to initiate the expensive and time-consuming hobby of bee-keeping. $300 for a starter kit? We can buy decades' worth of honey with that money! Did we have time to invest into starting another hobby? No, not really. However, we still needed the colony removed, and called upon our neighbor Cedrus across the street, who has been raising bees for about 5 years, to help us. He told us that this colony, a ball 6 inches in diameter, contained only about 1000 to 2000 bees—minuscule compared to the typical size of around 50,000 workers. This colony probably has a 50% chance of surviving the winter here, where nighttime temperatures not uncommonly dip into the mid-20s.

Cedrus came by with a hive box, smoke can, and some other gear to capture the queen and transfer the colony to the safer and warmer abode to build their new hive. Pine needles or eucalyptus leaves are used for the smoke. The smell is rather similar to incense and it calms the bees.


The smoke hides the alarm pheromone that bees emit when they feel threatened. It is also hypothesized that they respond as if evacuating from a forest fire, and thus are less attentive to predators. Using a bee brush, Cedrus broke off the clumps of bees from our grape vine into a small bucket and poured the bees into the box. He found the queen, only slightly bigger than the workers, after a few sweeps and tried to get as many bees into the box as he could, since such a small colony needed every last bee to survive the winter.

While some beekeepers wear gloves, Cedrus explained that gloves prevent you from feeling bees if you accidentally get too close to one. If you touch one with your bare skin, they will buzz and you can ease the pressure once you feel the vibrations. However, the vibrations don't pass through gloves as easily, making it easier to squish them. Killing a worker bee will release alarm pheromones to the other workers, who in turn raise their aggression. After handling bees for a while, he noticed they were becoming slightly more aggressive: they would bump his hands with their head, but never stung him.

After he closed the top, he asked me to help him by lifting the hive box so he can brush off bees from the bottom before placing it down on the ground. "Are you allergic to bee stings?" he asked. "I've only been stung once. Don't you find out the second time around whether or not you are allergic?" I asked. Actually, he explained, your allergenicity can change at any point. Some people find out they are allergic upon the first sting, while others notice their reactions change after beekeeping for over 20 years.


Fearless (or reckless?), I put on the hat and net over my head, roll up my sleeves, and step up to the task. Having multiple honeybees land on your bare skin is frightening, exciting, and humbling. Recognizing that they are not aggressive and trusting in both their instincts and my own made me feel much closer to nature, and to an extent, more at peace.

The next day, I came out to check on the honeybees. I could no longer hear their buzzing inside the box, and could only detect activity from a few that came in and out from the opening. Back on the grapevine, where they were before, I could see clusters of white beeswax where they had started building for a few days.

It has been a great learning experience - both from our knowledgeable neighbor as well as some subsequent "light" reading on wikipedia. I look forward to observing them in the coming months! 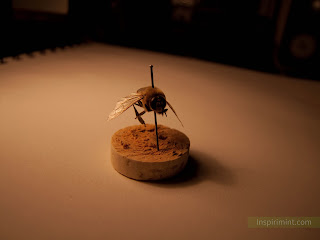